Home Blog Posts Who We Are 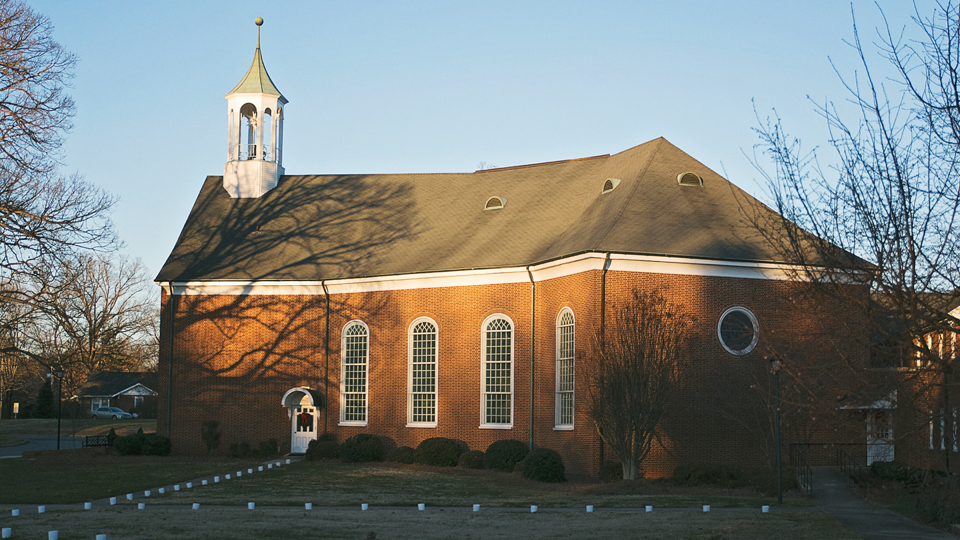 New Philadelphia Moravian Church was established on July 26, 1846 to serve the New Philadelphia Community, hence our name. The community itself is gone, long ago swallowed up by Winston-Salem; but the church remains. Today New Philadelphia is a large regional church serving western Winston-Salem, Clemmons, Lewisville and beyond. Several of our members come weekly from Kernersville, Greensboro, Mt. Airy, Advance, etc. At present we worship one service each Sunday at 9:30 a.m. We have a Sunday School for all ages at 10:45 a.m., and an active program for Middle and Senior High Youth. Our aim is to have a quality, large church program that can meet the needs of individuals and families regardless of their age or station in life. We take pride that, though we have grown in numbers, we have maintained a personal touch. Our character is summed up in our mission statement:

New Philadelphia seeks to be an open and caring Christian congregation in the Moravian tradition, worshipping God and honoring the scripture, while encouraging one another to live, love, and serve like Jesus as we follow the lead of the Holy Spirit.

The Moravian Church was first known by the name “Unitas Fratrum.” It is a Latin phrase meaning, “Unity of the Brethren.” Worldwide, it is still our official name. We are called Moravians because the church got its start in Moravia and Bohemia.

John Hus was a Catholic Priest and the Dean of the Chapel at the University of Prague. He was immensely popular because he preached the simple Gospel of Christ in the language of the people. Unfortunately, when Hus began to speak out against the immorality of the clergy and other inconsistencies in the Church of his day, he made enemies in high places. Charged as a heretic and condemned by the Council of Constance, Hus was burned at the stake on July 6th, 1415. It is often said that the Moravian Church “grew-up out of the ashes of Hus.” The church was officially founded in 1457. The Ancient Brethren’s Church flourished for a time, but was persecuted almost out of existence during the 100 Years’ War. As he was dying, Bishop John Amos Comenius—also known as “the Father of Modern Education,” prayed that “a hidden seed” might be preserved until an appropriate time.

The Moravian Church received its second birth in Herrenhut Germany in 1727, on the estate of Count Nicholas Ludwig von Zinzendorf. The church was made up of refuges from the Ancient Unity, Lutherans–with whom they maintained close ties, members of the Reformed Churches, and other smaller denominations. The Moravians found that as long as Christ was at the center of their life, their theological differences were of no consequence. Ecumenical from the very beginning, Moravians became leaders in the Protestant World Mission movement, sending missionaries to peoples as diverse as the African slaves working on the plantations of St. Thomas in the Virgin Islands and the Eskimos in Greenland.

In the 18th century, much of the movement in the world was from Europe to America. The Moravians followed suit. Since the American colonies still subject to Great Britain, Zinzendorf sought to establish ties with the Church of England. In 1749 the British Parliament declared the Moravian Church to be “an Ancient Protestant Episcopal Church, most similar in doctrine to our own,” and a number of English speaking people joined the movement.

In coming to the New World, the Moravians first traveled to Georgia where they made initial contact with John Wesley, the founder of Methodism. Wesley was greatly influenced by the Moravian understanding of faith. Today, Moravians and Methodists still have much in common. From Georgia the Moravians went to Bethlehem and other settlements in Pennsylvania. The Georgia settlement was short lived, but Moravians thrived in Penn’s Woods. Today Bethlehem, Pennsylvania is the home of Moravian College and Moravian Theological Seminary.

In 1753 Moravians traveled south into North Carolina. Bethabara, meaning “house of passage,” was the first settlement in our state. In 1756 Bethania was established, and then, in 1766, Salem. A visit to Bethabara Park, Bethania, or Old Salem is a great way to learn about Moravian history. It is a wonderful window into early American life. Visit Old Salem on the World Wide Web at www. oldsalem.com. Historic Bethabara Park can be found at www.bethabarapark.org

The desire to spread the Good News about Jesus Christ carried the Moravian Church literally around the world. Today there are over eight hundred thousand Moravians in more than a dozen countries including Canada, the Czech Republic, Jamaica, Germany, Guyana, Honduras, Nicaragua, South Africa, Surinam, Tanzania, the United Kingdom and the United States.

Since the time of Zinzendorf Moravians have sought the Christian Unity for which Jesus asked in John 17, when he prayed, “May they all be one.” Though decidedly evangelical in spirit, the Moravian Church is a broad church in its desire to include all Christians in its circle of brothers and sisters.

In one sense, the Moravian Church is small and seemingly inconsequential in comparison to some larger denominations, but in another sense, it may be viewed as the small hub in the center of the large wheel that is Protestant Christianity. Moravians tend to be closer to almost every other denomination than virtually any other denomination. Moravian ties are not just with other Protestants. Moravians are indebted to the Greek Orthodox Church whose missionaries Cyril and Methodius first brought the gospel to our forbearers. Likewise Moravians and have a fond regard for the rich history of the Roman Catholic tradition.

The character of the Moravian Church is expressed in its seal and its motto: The seal portrays a Lamb with a banner of victory and proclaims, “Vicit Agnus Noster Eum Sequamur,” which means, “Our Lamb Has Conquered, Let Us Follow Him.”

Download a copy of the New Philadelphia Intro PDF here. It’s all you want to know in one place.

Download a copy of the Moravian Intro PDF here.