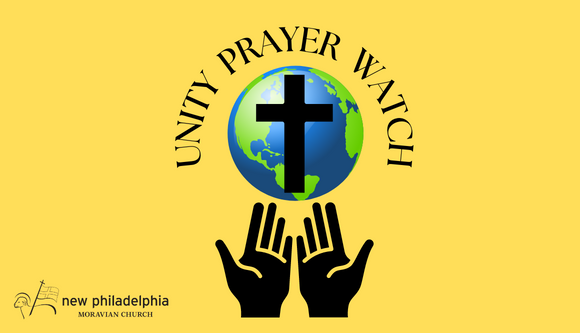 The origins of the Unity Prayer Watch date to the time of the reorganization of the Unitas Fratrum (Moravian Church) in Herrnhut, Germany, and in particular the powerful unifying experience of the Holy Communion service on August 13, 1727. In the days following this awakening a group of men and women decided to establish a “holy watch over the congregation.” This was seen to follow the biblical command to pray without ceasing (1 Thess. 5:17) and to reflect the promise of the prophet Isaiah that God would set sentinels on the walls of Jerusalem that would not keep quiet day and night (Isa. 62:6-7). Brothers and sisters signed up so that each one could take one hour of the day or night to pray in his or her room. This prayer watch was known as the “hourly intercession,’ and continued within every Moravian congregation for roughly 100 years, even as the Church grew and spread worldwide.

In 1957, when the Unitas Fratrum celebrated its 500th anniversary, the women’s group of Herrnhut proposed a revival of the hourly intercession for the entire worldwide Church as part of the anniversary year. At Unity Synod that year it was unanimously agreed to reestablish the Unity Prayer Watch on an ongoing basis throughout the entire Church.

The Unity Synod of 2009 reaffirmed this covenant and added new provinces to the list reducing the number of days of responsibility of the Southern Province from previous years. Through the prayer watch, prayer is being offered somewhere in the worldwide Unity 24 hours a day, 365 days a year. The church has gained a great deal of strength in good times and in times of difficulty through prayer.

Use the prayer watch to:
1. Emphasize the importance of prayer in the life of every Christian and every congregation;
2. Remember before God one’s personal needs, the needs of your congregation, and the needs of the world; and
3. Bring before God the concerns of the worldwide Moravian Church. Our church is located in areas of the world experiencing both challenge, conflict, and significant opportunities for the gospel of Jesus Christ. Reflect prayerfully on these as you follow the enclosed prayer suggestions.