Home Blog Posts Faces Around the Cross: (8 of 9) 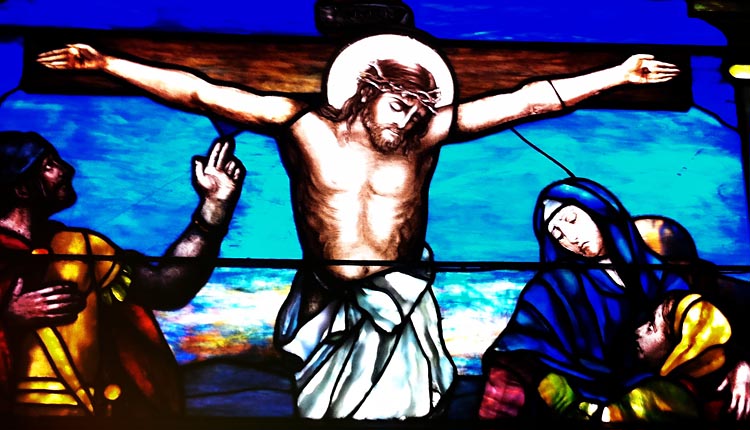 On Trinity Sunday we recall that we worship, One God, and yet that One God has shown Himself to us with three “persona,” which is Latin for “faces.”

The first face God revealed to us is the face of the Creator and Sustainer of the Universe. We see evidence of him all around us. “Ever since the creation of the world his invisible nature, namely, his eternal power and deity, has been clearly perceived in the things that have been made.” (Romans 1:20) Yet the Creator himself is “Immortal, invisible, God only wise, in light inaccessible Hid from our eyes.”

The second face God revealed to us is the face of God the Son. The 4th Gospel declares, “No man has seen God, the only Son who is in the bosom of the father has made him know. “ And In 2nd Corinthians 4:6 St Paul writes, “For it is the God who said, ‘Let light shine out of darkness,’ who has shone in our hearts to give the light of the knowledge of the glory of God in the face of Christ.” It is because of God the Son that we even speak of God the Father. It is because of God the Son that we know that God the Father is irrevocably on the side of the Human Race. Without this knowledge faith is tenuous at best. I remember the day when it became clear for me.

Way back in 1977 I was a student chaplain in Clinical Pastoral Education at the University of Kentucky. One day I was summoned to the bedside of a dying man who wanted to make a profession of faith. I waded through a sea of men in white coats, and sat by his bed. I said, “I understand you want Jesus to be your friend?” He said, “Yes,” and I prayed with him. Then, to everyone’s surprise, he lived. We became friends. His health improved. He left the hospital. Yeh! Yea. A month later he was back. I found him when I rotated to ICU. He had suffered a massive stroke. He did not recognize me, or anyone. Eventually they had to take off a leg. One afternoon I stood and watched several interns pick the bone chips out of the socket where his leg had been. I stood there because, if he had any comprehension at all, I wanted him to know that he was still the same person and I still accepted him and cared for him. I stood there for some time, then there came a moment when I was overwhelmed. I went into the hallway. I looked up to heaven and asked, “God, do you care about us in our pain and suffering?” “Do you care?” An answer came to me as I though of the words of a hymn by Charles Wesley, “Amazing love and can it be, that thou my God’s shouldst die for me.” God suffering with us!

I recently receive an email from a student who studying in a university. He is interested in faith. He is studying philosophy in hopes of finding God. Like many before him, he stumbled at the stumbling stone of human suffering. He wanted my help. I wrote him back and told him that I could not help him with his philosophical study of God. I am not interested in the God of philosophy. Long ago, because of human suffering, I decided that the only God I can believe in is the God of the Cross that the New Testament calls ‘the God Father of our Lord, Jesus Christ.” This God alone, in the person of the Eternal Son, has entered into our human pain and suffering, and has even taken death into Himself. I advised the student to leave off reading philosophy and read his New Testament like his life depended on it. I told him to read it critically, with all the tools he could muster; but to read it for himself. I told him to seek the Truth and the Truth would find him.

The third face that God has revealed to us is the face of God the Holy Spirit. The Nicene Creed declares that God the Holy Spirit “proceeds from the Father and the Son.” The Holy Spirit is the Other Counselor whom Christ sent to be with us. He convinces us of right, and of wrong, and of Judgment. (John 16:8) He testifies to Jesus Christ and enables us to believe in him. (John 16:14, 1st John 5:7-9, etc.) Jesus compared those who are “born” of God the Holy Spirit with the wind. He said, “The wind blows where it will, and we hear the sound of it; but we do not know whence it comes or whiter it goes and with those who are born of the Spirit.” So it is with the Spirit who is behind the movement. We don’t always see the Holy Spirit working in our lives and in the lives of others—though sometimes we do, as I see the Spirit work in the life of that student; but, afterward, we see the evidence that the Spirit has has been at work. We see it from the movement, the change, the transformation.

The Late E. Stanley Jones, the United Methodist missionary and evangelist, was once invited to preach in the largest Methodist Church in the state of California. He wrote the pastor a letter that he would be speaking on the Holy Spirit. The pastor wrote him back and urged him to take another subject, for he had seen things attributed to the Holy Spirit he did not like. Stanley Jones wrote the pastor back and quoted 2nd Corinthians 3:17, “Now the Lord is the Spirit, and where the Spirit of the Lord is there is freedom.” Not fear and bondage but freedom. He said that the Holy Spirit is Christlike, and produces Christlikeness in people. The pastor wrote back saying, “Come ahead and preach on the Holy Spirit, we all need to be more Christlike.” (See Footnote: #1)

So, God the Father is Christlike, for he is the God and Father of our Lord Jesus Christ. And the Holy Spirit is Christ like, because the Lord is the Spirit, and it is the Lord who fixes the personality of the Holy Spirit. In John 7:39 we read that “the Spirit, which those who believed in him were to receive; for as yet the Spirit had not been given, because Jesus was not yet glorified.” In the 4th Gospel the glorification of Jesus takes place at his death. This means that Jesus had to fix the character of the Holy Spirit in life and in death. And, finally, Jesus the Christ is, well, God-like, for he is “the image of the invisible God” (Colossians 1:15), the supreme revelation of God and his character.

Now I want you to notice how God the Son relates to God the Father. The 4th Gospel has, perhaps, the highest insight into their relationship. Here are just a few examples.

The Son and the Father with the Holy Spirit act as one. Jesus lives and breathes the Spirit, the Wind of God. Yet, on the cross, there comes a moment in which the Son cannot detect even the slightest hint of the unseen presence. In that Moment he cries out, “Elo-i, Elo-i, lama sabach-thani?” which means, “My God, My God, why hast thou forsaken me.”

People talk about the physical suffering of Jesus. Mel’s Gibson’s movie “The Passion of Christ,” amplifies this suffering. When Jesus is scourged, his back is a bloody mess, and his legs. The white bones are exposed, and poke through the red blood. On the cross his agony is intense. And surely death by crucifixion is among the most painful of deaths. And yet no amount of physical suffering can match the suffering of being completely blind to the presence of God.

Yet in his inability to sense God at work in his life, Jesus does not loose faith, he does not become an atheist or an agnostic. His cry is still, “My God, My God.”

Jesus kept his faith in God, and God the Father, kept him.

In his book, “A Faith to Proclaim,” the late James S. Stewart, the great Scottish Presbyterian preacher and theologian, says that in preaching the Cross, we must remember it is not just the cross of Jesus, but the Cross of God, Father, Son, and Holy Spirit. He says we ought never to preach the cross as Jesus giving himself as a sacrifice to appease an angry God. God is at work from the beginning. You remember John 3:16, “For God so loved the world that he sent his Only Son….” To illustrate this truth Stewart describes a painting that once hung in the National Gallery of Great Britain, just off Trafalgar Square. Several years ago, when I was in England, I went looking for it, it was not there. It had been removed. It was never that popular.
The painting shows Jesus on his cross. His hands are extended and nailed to the cross. The crown of thorns has been pressed upon his head. His blood flows freely, from a variety of cuts and wounds. And his eyes, though turned toward heaven, are empty of hope, and filled with despair. It is the moment in which he utters his cry, “Elo-i, Elo-i, lama sabach-thani?”

Faith Declares that the Unseen Presence Whom we call God the Father watched the Death of the only begotten Son from the portals of heaven, and that is so doing, God the Father saw Himself, as in a mirror, looking back from the depths of our human despair. And the Spirit is the witness to this, and testifies to us of it.

Christ felt the total absence of God, and yet God was present, one of the “faces” around the cross. God was present in Christ’s crucifixion, and in his death, and in his time in the grave, and in his journey to “the place of departed spirits” (The Apostle’s Creed) where Jesus preached to the spirits in Chains (1st Peter 3), and, most assuredly in his resurrection on the third day, when God reached down, and lifted Jesus to his right hand, and gave him a name which is above every name, that at the name of Jesus every knee should bow, and every tongue confess that “Jesus is Lord,” to the Glory of God the Father. (Philippians 2)

In the same way we may sometimes feel like God is absent, but he is not. In 2nd Corinthians 1:8-10 St. Paul himself said that there was a time when he was so bitterly, unbearably crushed that he despaired of life itself, but that, he said, was to make him rely on God who raises the dead. He said, “He delivered us from so deadly a peril, and on him we have sat our hope that he will deliver us again.”

Without having seen him you love him; though you do not now see him you believe in him and rejoice with unutterable and exalted joy. As the outcome of your faith you obtain the salvation of your souls. 1st Peter 1:8-9