Fall Back One Hour 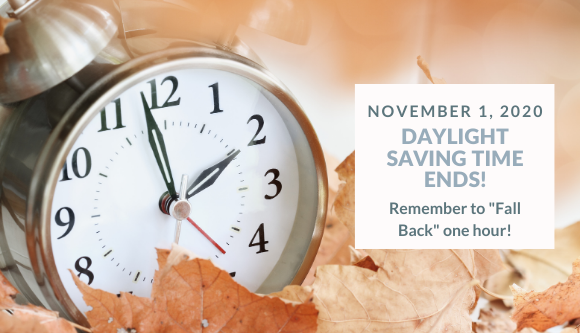 It’s that time of year – again!

Don’t forget to Fall Back one hour early Sunday morning, November 1 or change those clocks before you head to bed.

Daylight saving time (DST), also daylight savings time or daylight time (the United States and Canada) and summer time (United Kingdom, European Union, and others), is the practice of advancing clocks during warmer months so that darkness falls later each day according to the clock. The typical implementation of DST is to set clocks forward by one hour in the spring (“spring forward”) and set clocks back by one hour in autumn (“fall back”) to return to standard time.[1][2] In other words, there is one 23-hour day in late winter or early spring and one 25-hour day in the autumn.

George Hudson proposed the idea of daylight saving in 1895.[3] The German Empire and Austria-Hungary organized the first nationwide implementation starting on April 30, 1916. Many countries have used it at various times since then, particularly since the 1970s energy crisis. DST is generally not observed near the equator, where sunrise and sunset times do not vary enough to justify it. Some countries observe it only in some regions; for example, parts of Australia observe it, while other parts do not.[4] Only a minority of the world’s population uses DST; Asia and Africa generally do not observe it.