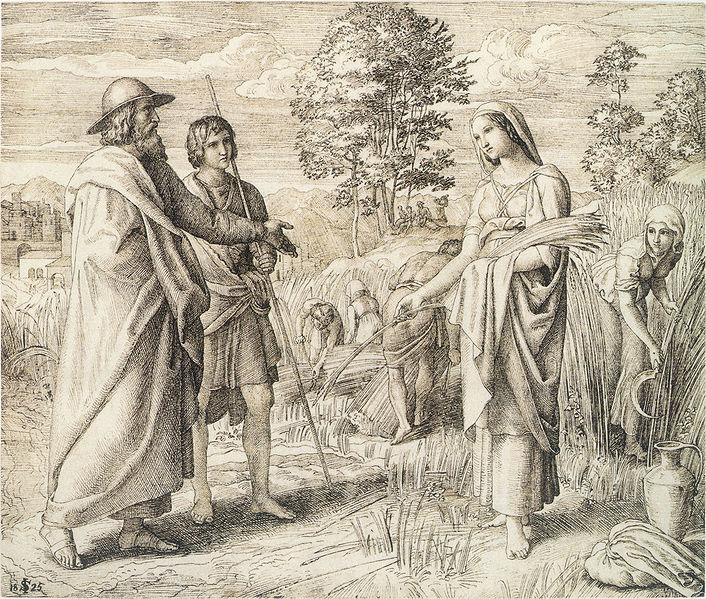 There was a family at one of my former churches with a special story.  This family included two adult brothers who talked about their mother, who had died while they were still very young.  Their mother became ill, and knowing she didn’t have long to live, she told their father about another woman in their community — a woman who was her friend.  And she told their father, “After I’m gone, I want you to marry this woman.  She’ll be a good mother to our sons.”

And it wasn’t long before the boys’ mother died, and their father soon became close to this other woman, and sure enough, eventually, they were married.  This new wife entered the family under difficult circumstances, but became a loving wife and a good mother to the sons, as they grew older.

Maybe you’ve heard of stories like this.  Maybe you’ve known families who have pieced things together following a time of loss.  Over time, I’ve realized that stories such as this one aren’t entirely unheard of, but they’re still somewhat rare.

I remembered this family when I thought about the Book of Ruth — Ruth, which is a favorite story of the Bible for many, an unfamiliar story for others.  It’s an amazing story, a short story, and also, a situation which is not altogether uncommon.  Ruth 1 begins the journey of Ruth and Naomi.

I spent one summer during seminary, nineteen years ago, studying Hebrew.  While other people I knew were going on vacation, or going to camp, I spent several months in a hot apartment with no air conditioning learning to read Hebrew — learning the alphabet, reading right to left, learning how and when to place vowels in words with only consonants.  And when Hebrew was finished at the end of the summer, our class translated the Book of Ruth during the fall.

Ruth, four short chapters, with a huge impact.  A story of life and death, feast and famine, love and loss, and love regained.

The story tells us of the town of Bethlehem, which means “house of bread” in Hebrew — it suddenly had no bread, as there was famine in the land.  People were hungry and many soon became refugees who went off in search of food.  For a while Elimelech and Naomi find that sustenance in the land of Moab. Things get better, but only briefly, because soon the family’s breadwinner dies. That’s difficult, but the situation improves when the remaining sons get married. And for ten years life goes on before disaster strikes yet again and the two sons also die.

The two young widows, Orpah and Ruth — they might be able to get married once more. They might yet have children. But Naomi sees no future. In those times, for women, the best way out of poverty was to get married. But Naomi’s marrying days and child-bearing days are long gone. Her best option is to go home and hope for some merciful extended family member to take her in.

And Naomi tells Orpah and Ruth they really are better off staying in Moab. Orpah is the more sensible of the two young widows and does just that. Orpah, which means “back of the neck” or “stiff-necked” literally turns her back on her mother-in-law.  This is the name Oprah Winfrey was given at birth, but members of her family had a hard time pronouncing it, and she’s been “Oprah” ever since.

Ruth, on the other hand, goes against common sense and decides to stick it out with Naomi, despite the circumstances. Here’s where Ruth says the famous words, “Do not press me to leave you or to turn back from following you!  Where you go, I will go; where you lodge, I will lodge; your people shall be my people, and your God my God. Where you die, I will die — there will I be buried.”

Now Naomi had one more mouth to feed in addition to her own and, although we normally hold up Ruth’s loyalty as a noble thing — with the line about “Where you go, I will go” quoted at many weddings — Naomi probably regarded Ruth’s stubborn loyalty as one big pain in the neck. This was going to make things more complicated for her, not easier.

Ruth stays with Naomi. Ruth, meaning “companion” or “friend” — clings to her, abides with her. She will even become an Israelite, including the religion, if that’s what it will take to stay with her mother-in-law.

This section became a routine wedding passage: “Where you go, I will go; where you lodge, I will lodge; your people shall be my people, and your God my God.”  And it’s often interpreted, if you don’t know the story, as the coming together of two spouses.  That’s not the case, but it’s still a fitting, appropriate story for any wedding, because any wedding brings together two families.  Like it or not, when you get married, you marry that person’s family, and all the joys, sorrows, the ups and downs that come with it.

Naomi and Ruth return to her town of Bethlehem, and Naomi, having lost her husband and two sons, tells her friends, “Call me no longer Naomi (which means ‘pleasant’), call me Mara (which means ‘bitter’) for the Almighty has dealt bitterly with me. I went away full, but the Lord has brought me back empty.”

Over time, Ruth worked in the fields gleaning the wheat left behind by the reapers so she could care for herself and for her mother-in-law, until one day a man named Boaz notices her and shows her his favor by telling the harvesters to leave some food for her.

Naomi was clever enough to arrange things so that Ruth would meet Boaz again, and eventually Boaz claims Ruth from the relative who should have married her, according to the law, by getting him to renounce his claim in public.

The story shows us the love and devotion between a woman and her mother-in-law.  Of course, mothers-in-law are the brunt of so many jokes.  Too often, the relationship between a man or woman and their mother-in-law can vary from uneasy, to competitive, to destructive.  And we’ve all heard the mother-in-law jokes.  Including, from 1961, the song “Mother-in-Law” by Ernie K-Doe:

The worst person I know
A she worries me, so
If she’d leave us alone
A we would have a happy home
Sent from down below

Satan should be her name
To me they’re about the same
Every time I open my mouth
She steps in, tries to put me out
How could she stoop so low

Remember that Ruth was from Moab, and the Moabites were hated by Israel.  The Moabites worshipped the god Chemosh, and they were known for idolatry and for practicing child sacrifices.  But Ruth puts all of this behind in saying “your people shall be my people, and your God shall be my God.”

Why is the Book of Ruth important?  Why is this story of Ruth and Naomi still important for us?

One of the reasons the Hebrews have loved the Book of Ruth so much is that it pictures the marriage relationship that God has with God’s people. God, who is constantly seeking us, who longs to have a relationship with each of us, and never stops pursuing us. Another reason why Ruth is admired is because she is seen as the first “believer by choice” in the Bible. She put her faith in the God of Abraham voluntarily and she did so with a total commitment.  “Your God shall be my God” is a powerful statement.

And this story wouldn’t be so important, or so revered, if it weren’t for the last word of the Book of Ruth.  And the very last word is the word “David.”  Once Ruth and Boaz were married, she became the mother of Obed, and Obed was the father of Jesse, and Jesse was the father of David, his seventh son.  This was David who became the king, the very king from whom was to come the Messiah, the very king who made Israel a great nation and the God of Israel known in the world.

If Boaz had not loved the one whom it was “wrong” to love, a woman from a foreign land hated by Israel, then that which was right could not have occurred.  There would have been no David, nor Solomon, nor temple, nor glory, nor kingdom, nor power, nor the story of faith we have come to know through the ages.

A heard the story about a man who had been adopted when he was young, and how he had to ask the question over and over again in his life. What is family based on, blood or love? The two are often not the same. His father and mother took him in as a young child, fed him, gave him safety, security, and faith. They applauded him at his high school graduation, they applauded again at his college graduation, and they now are grandparents for his daughter. He has lived with them and will die with him — they are his family. And if we can just remember that through adoption, we are all part of God’s greater family —  both Ephesians 1 and Romans 8 tell us we are adopted as God’s children through Christ.

And that is the powerful, beautiful ending to the story of Ruth. New promises, and a new grandmother, Naomi, who gets to hold her grandchild. This child is family to her not because of blood, but because Ruth continues to call her family.

Because Ruth would become a distant ancestor of a man from Nazareth named Jesus, thus Ruth is included in the family tree of Jesus with which Matthew opens his Gospel. No one would have guessed such a thing for a woman who was such a poor, foreign, outsider when we first met her. But many years later in Bethlehem, from a manger in a stable of all places, you could hear the cry of a small baby. And for those with ears to hear, there was a sense also, even then, that God was still present, still moving our lives from emptiness to a great fullness.  Through this child, moving us to adoption into God’s family.

We believe in a God who still seeks us, and pursues us, and calls us.  And God calls us family, each of us, brothers, sisters, all of us, still.  And for that, we give thanks.