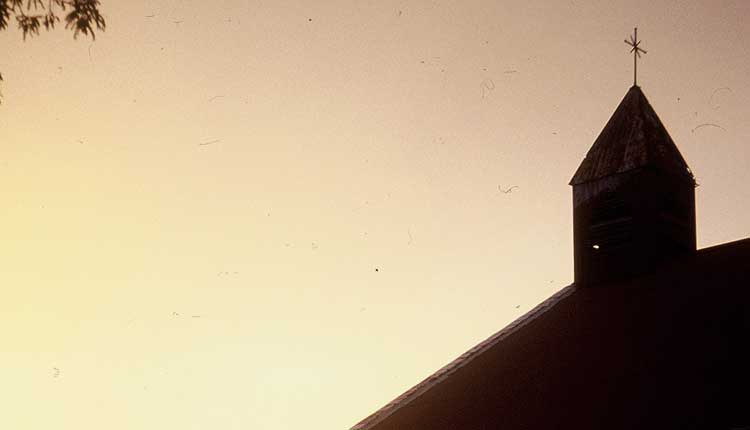 D.L. Moody the great 19th Century Evangelist once said, “Someday you will read in the newspapers that D.L. Moody is dead. Don’t you believe it, at that moment I will be much more alive than I am today.”

The Good News of the Gospel is even on the last day of our life upon this earth we have hope. Even facing death, as Christians,  we “rejoice in our hope of sharing the glory of God.” (Romans 5)

What does it mean to share the glory of God? The New Testament never fully explains that, probably because we cannot fully comprehend it. In 2nd Corinthians St. Paul hints at it. He writes:

“What no eye has seen, nor ear heard, nor the heart of man conceived, what God has prepared fro those who love him, God has revealed to us by the Spirit.”

What the Apostle means is that the Holy Spirit whispers deep inside of us that the trials and tribulations of this world will not be worth comparing to the glory that will be revealed to us in the next. Heaven is better than anything we can imagine.

The great 20th Century theologian and apologist, C.S. Lewis, said that life in heaven would be like life in this world, but infinitely better. He said it would be like eating vanilla for a lifetime and then discovering Chocolate.

Or, what about this? The Book of Revelation describes the New Heaven and the New Earth as a place where precious things are common and common things are precious. Thus the streets of the New Jerusalem are paved with gold as clear as glass. The twelve foundations of the city are made of precious stones. And each of its 12 gates consists of a single gigantic pearl. Precious things are common. And common things are precious. The tree of life that grows on either side of the river of the water of life bears not one kind of fruit, but twelve different kinds of fruit, a different fruit for each month of the year as we know it, and “its leaves are for the healing of the nations.” That is quite a tree. I wish I had a couple in my yard!

The description of the New Jerusalem from The Revelation puts me in mind of a conversation I once had with late Br. Bill Sides, Sr.  Bill was famous for his tomatoes. I asked him what heaven would be like. Without hesitation he told me that heaven would be a place where tomatoes would grow “this big”—and he indicated that in his vision of heaven tomatoes would grow to the size of pumpkins.

Personally, I can’t conceive of faith in Christ without faith in resurrection and eternal life. He is the first born from the dead that in everything he might have preeminence, but he is not the last. He is the first fruits of the harvest, but he is not the whole harvest. His resurrection is the sure sign that God has a future and a hope for us, too. And that future is coming to us in him.

But what about today? Is there a hope for today? Does God care about what is going on in our lives right now? Is he ready to help us? I believe that God is ready to help us.

In 2nd Corinthians 1:8-11, St. Paul talks about a time in his own life when he needed God’s help. He writes:

1:8 For we do not want you to be ignorant, brothers and sisters, of the affliction we experienced in Asia; for we were so utterly, unbearably crushed that we despaired of life itself. 9 Why, we felt that we had received the sentence of death; but that was to make us rely not on ourselves but on God who raises the dead; 10 he delivered us from so deadly a peril, and he will deliver us; on him we have set our hope that he will deliver us again.

The truth is that Paul hoped in God for life in this world, because God had delivered him over and over again.

God did not always deliver Paul from his difficulties, but he delivered him through them, and because he did, Paul’s hope in God became stronger and stronger.

Did you get that? Hope, when it is tried and tested, produces more hope!

Over the years I have talked to many, many people who have emerged from a time of trial and see their prayers for deliverance from and through their problems answered.

Many of you will remember the late Mike B_______. Mike was a navigator on a B-17 bomber during the 2nd World War. Mike told me about a daylight-bombing mission that his plane flew over Germany with more than a dozen others. The planes dropped their bombs, and then the German fighters found them. They were bent on revenge. One by one they picked off the B-17’s, until Mike’s plane was the last American plane left in the skies. Mike said, “I do not know why my plane made it when so many other did not. I felt almost guilty for being alive and safe. The only way I could go on was to thank God for having delivered me, and get on with the business of winning the war. It was not the last mission I flew. There were many others, but it was the mission I will always remember.”  “God delivered us from so deadly a peril,” said Paul, “and he will deliver us; on him we have set our hope that he will deliver us again.”

Or what about this? I have a friend who died this summer of a terrible kidney cancer. When the doctors found it, it was so advanced that the surgery itself was a risk. The remarkable thing is that 9 years ago my friend was told that he had kidney cancer. They did all the tests, and scheduled him for surgery. They sliced into his kidney. To their utter surprise, they found nothing. They sewed him up, and sent him home, and told him to rest, and his recovery took just as long as if they had removed a cancer. He did not blame the hospital for misdiagnosing his condition. He did not complain that he had been put through an unnecessary surgery. He was a man of faith. He simply thanked God for a new lease on life. “God delivered us from so deadly a peril,” said Paul, “and he will deliver us; on him we have set our hope that he will deliver us again.”

Or what about this? I know a young man whose business absolutely failed. He lost his house, his car, and almost everything else of value that he had ever owned. He was a husband and a father. He went without health insurance so that his wife and children could have coverage. Things went from bad to worse. There was no steady work. Then, when he was about to give up, and take a job at Walmart, or anything else he could get on a permanent basis, a friend called from a distant city, and offered him the job that he needed, and more. It was a dream job. He had never despaired of life—but he had stared into the face of total failure, and viewed it as inevitable. After he got the new job, he looked back over all that he had endured and said, “I believe that the difficult time which I passed through was all a part of God’s plan to bring me to something better.” “God delivered us from so deadly a peril,” said Paul, “and he will deliver us; on him we have set our hope that he will deliver us again.”

Those are a few examples: What should you do if you are in a difficult situation?

When I was just starting at Fries Memorial, I was still learning to preach without notes. One Sunday I forgot what I was going to say, and try as I could, I could not think of anything else to say. I apologized, said the benediction, dismissed the congregation, and left the building.

That week I got a card from the late Ms. Sally Reed who had been head of Nursing at the old city hospital. There was a picture of a cat, hanging from a knot at the end of a rope.

The caption read, “When you reach the end of your rope, tie a knot and hang on!” And she had written in her own hand, “Help is on the way.”

Second, don’t give up.

Remember that necessity is the mother of invention!

I do not think that God will help us until we have done all that we can to help ourselves.

You might ask, “Worth, have you ever worked in a fast food restaurant? No, but between periods of school, or unemployment, I walked on to many a construction site and asked for a job at the lowest level, and I always got one.

In 2nd Corinthians St. Paul urged the Church at Corinth to pray for his deliverance. He says, “11 You also must help us by prayer, so that many will give thanks on our behalf for the blessing granted us in answer to many prayers. “ When I am faced with a difficult, I don’t hesitate to ask for prayer. P.T. Forsyth called prayer “the Great Two-Handed Engine at our Door.” When I read that I always think of Albrecht Durer’s “Praying Hands.” I always remember, too, that “Prayer moves the hand that move’s the world.”

A pastor recalled a time when he was just a boy of twelve. His father had died. His mother was without work, and yet she had to feed him, and his brothers and sisters. One night his mother set the table for supper and said, “This is it. There is nothing else. We will have to get some money somewhere, or we will go hungry.”

“The next morning,” he said, “I was walking the dirt road that led from my house to the highway. I was praying for a way to help my mama. A car went by the end of the road, and then it stopped, turned around, and turned down our road. The car stopped just as it came up to me. A man leaned out the window and said, ‘Son, I am a Methodist preacher. God has recently blessed me with a gift of $5.00, and I would like to pass it on to you.’”

One person who was at the conference said with tears in his eyes, “You can build a life of faith on one experience like that.”

“We were so utterly, unbearably crushed that we despaired of life itself. 9 Why, we felt that we had received the sentence of death; but that was to make us rely not on ourselves but on God who raises the dead.”