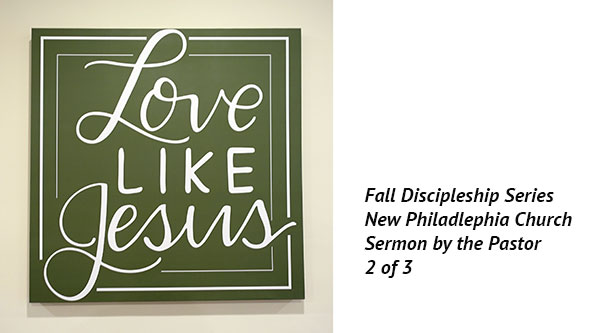 Today we are going to talk about, “Loving Like Jesus.” We will pay attention to what Jesus did and what Jesus said. What Jesus said is always illustrated by what Jesus did. He was throughly consistent. If Jesus said, “Love God with all your heart, soul, mind and strength,” we can be sure that Jesus loved God with all his heart, soul, mind, and strength.” This is demonstrated in the gospels by his dedication to prayer, and worship, and Scripture, and by his faithfulness unto death, even death on the cross. Likewise, if Jesus said, “Love your neighbor, as you love yourself,” we can be sure that Jesus loved his neighbor as he loved himself. Long before he was crucified, Jesus started making the small sacrifices that made it possible for those around him to live better lives.

Does that mean that Jesus was an easy-touch and a pushover? Not at all! Jesus was disciplined in his approach to himself, and Jesus was disciplined in his approach to others. On a day so special that it is remembered in all four gospels, Jesus fed 5,000 with just five loaves and two fishes. No doubt Jesus was always ready to share the least morsel of food with anyone who was hungry. Likewise, Jesus and his disciples kept a money bag, or a purse. From it, they sometimes made donations to the poor. I am quite sure that Jesus would have given money to anyone who could not work. However, I am equally sure that Jesus would have refused to give money to anyone who would not work. We believe it was the Spirit of Jesus who inspired the apostle when he wrote, “If anyone will not work, let him not eat.” (2nd Thessalonians 3:10)

That said, we need not be too judgmental when someone comes to us for help. There are times when our heart will bid us do things our head forbids. Sometimes the recipients of our generosity maybe undeserving; but, even so, our gifts are never wasted. In Matthew 25 Jesus put himself in the place of all who have real needs, and he says in doing for them, we are doing for him, and we will not lose our reward.

Now what can we learn about loving like Jesus from what Jesus said and did.

1. We can be sure that Jesus recognized misdirected love when he saw it.

Jesus told his disciples that it was impossible to serve two masters. He said we would love the one and hate the other, or be devoted to the one and despise the other. Above all, Jesus knew we could not serve God and money. Likewise, Jesus told his disciples that some religious people are more concerned with the opinion of others, than with service to God. Jesus pointed out how some religious people liked to have “the best seats in the synagogue,” and “salutations in the market place,” and “places of honor at feasts.” Jesus also pointed out that many religious people spend too much time majoring in minors. He said, “They are careful to give a tithe of the spices in their spice rack, but they neglect the weightier matters of the Law, like love, and justice, and mercy.”

What do you love? There is a way to tell. Scott Peck says that we spend time with who and what we love. How do you spend your time?

Or what about this: Some years ago a prominent Christian psychologist made a survey of Christian men with children in their home. He asked these fathers to estimate the amount of quality time they gave each child each day. The majority of men who responded to the survey estimated that they gave each child 30 minutes of quality time each day. After a careful study conducted in hundreds of households, Dobson estimated that the actual figure was closer to 2 minutes.

Jesus said that our love is often misdirected. He said that we have a tendency to major in minors. The only way this will change is for us to make a conscious effort to change it. It is a fact that almost anyone can loose weight simply by writing down everything that they eat. Likewise, we can gain the time we need for important things by writing down all that we do; and putting it under careful scrutiny. We may want to repurpose our time.

2. We can be sure that he loved all the people whose lives touched his own.

Certainly Jesus loved his family. We know from the gospels that Jesus grew up in a large family. Mark 6:3 names four brothers, and says that he had “sisters,” too. We sometimes forget than in a life that spanned a little more than three decades, Jesus ministered not more that three years. That is he lived 1/10 of his life as a prophet and preacher; and 9/10’s of his life as a man with a family, and a job, and all the joys and difficulties and problems and possibilities that we have.

This does not mean that his family life was easy. Though at least two of Jesus’s brothers became eyewitnesses and apostles of the Risen Christ, according to St. Mark, there was a time when his brothers thought Jesus was beside himself, crazy. That said, it is obvious from the text that they did not cease to care for him; nor did Jesus cease to care for them, else he would not have appeared to them after his resurrection.

Unlike many of us, Jesus did not limit his love to those who agreed with him, made friends with him, and followed after him. St. Mark says that when the man we call “the Rich Young Ruler,” approached Jesus, and asked what he needed to do to inherit eternal life, “Jesus, looking upon him, loved him.” Jesus loved the rich young ruler, and invited him to sell his possessions and follow him, but he could not. The text says that the young man, “..went away sorrowful.”

Jesus sought God’s will for his own life, and he acted upon it. When speaking to his disciples about his mission, he said, “The son of man came not to be served, but to serve, and to give his life as a ransom for many.” When speaking to his disciples about his relationship to them he said, “Greater love has no man than this, that he lay down his life for his friends.”

One can only imagine how the disciples felt when Jesus said this. One of the disciples felt it so keenly that he referred to himself in the gospel that he wrote as “the disciple whom Jesus loved.” Does the fact that one disciple called himself “the beloved disciple” mean that Jesus loved that disciple more than Jesus loved the other disciples, or us? I don’t think so. I think that the beloved disciple simply expressed what he felt. You see, the amazing thing about Jesus is that Jesus loves all of us equally, yet Jesus loves each of us so intensely, that it is perfectly reasonable that each of us feels like he loves us as he does no other. In a sense he does: For Jesus understands us, and cares for us, from the inside out. That means he understands and cares for us, uniquely, as no one else can, not even those who are closest to us.

3. We can be sure that Jesus did not limit his love to family and friends, and those who loved him. Jesus loved even his enemies.

“You have heard that it was said,” You shall love your neighbor and hate your enemy. ‘But I say to you, Love your enemies and pray for those who persecute you, so that you may be sons of your Father who is in heaven; for he makes his sun rise on the evil and on the good, and sends rain on the just and on the unjust. For if you love those who love you, what reward have you? Do not even the tax collectors do the same? And if you salute only your brethren, what more are you doing than others? Do not even the Gentiles do the same? You, therefore, must be perfect, as your heavenly Father is perfect.

In asking us to love our enemies, Jesus does not ask us to do anything that he himself has not done. As Jesus hung upon the cross, he looked around at those who despised, rejected, and crucified him, and he prayed, “Father, forgive them for they do not know what they are doing!”

From time to time, I have known people who took literally the command of Jesus to love our enemies. When I was at the Little Church on the Lane, I knew a woman who had been a Radio City Musical Hall Rockette. She married a World War II fighter pilot, and for many years they lived a storied life. Then a man killed her father in a robbery. He was found out, caught, and put on trial. The trial dragged out for months. When at last the man was sentenced to life in prison, she asked the authorities to see him. The permitted her to do so. She wept as she told me how she went to the cell of the man who killed her father, shared her faith in Christ with him, and forgave him. She said that the man had wept to receive her forgiveness. Each time I remember this story, I am reminded of how Jesus said that those who are forgiven much, love much; and those who are forgiven little, love little. For years, I thought this woman’s story was unique. Then I went to Unity Synod. At Unity Synod I met a Moravian Pastor from Tanzania who told a still more marvelous story. He told how his young son had been killed by members of a neighboring tribe, who lived just across the river from his own. It was after this tragedy that he started attending a Moravian Church, accepted Christ, and declared himself a candidate for the ministry. For a time all went well. Then after his ordination, much to his chagrin, he was sent as a missionary to the same tribe that had killed his son. Not only did he go, but he planted a church, and it thrived. He said, “It was not natural; but I can testify that Romans 5:xx is true, “God’s love has been poured into our hearts through he Holy Spirit which God has given us.”

I have told you before about the pastor who said that he used to think that his life was like a $1000.00 bill given to him by God. For years and years he looked for a way he could spend so precious and valuable a gift. He never found it. Then he went to God in prayer and asked God to give him change for the $1000.00 bill, in nickels, and dimes, and quarters. Thereafter, each time he engaged in some small act of love, he saw it moving up toward the grand total. That, I think, is how the most of us will love like Jesus. We will gladly do the thousands of little things, that total up a life lived for him.