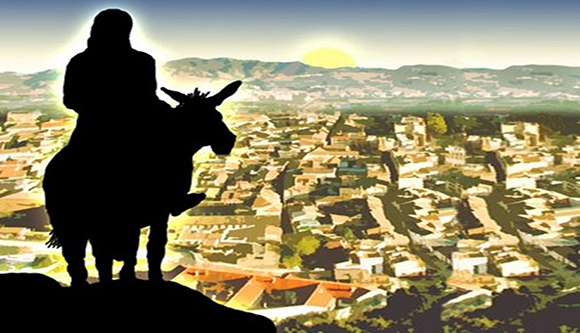 Today has been a Sunday that I have been anticipating for a long time. I just love Palm Sunday. It is one of the most joyful days of the year. It ranks right up there with Christmas Eve and Easter Sunday. So I was all geared up to preach a resounding, upbeat, joyful Palm Sunday sermon today.

I mean, how could I not be? Just look at this place! It is amazing how it has been changed from our beautiful sanctuary into a beautiful prayer garden. It is the perfect place for us to celebrate the coming of our Lord and Savior. Today, of all days is a time to focus on the joy; the joy of Palm Sunday, the joy of welcoming our Savior, the joy of preparing the way of the Lord, the joy of singing Hosanna! Blessed is he that comes!

For weeks now, I have been ready to “rejoice greatly” and “shout for joy” as we welcomed our Savior into our midst. And up until now, throughout all of this service, I was really feeling it. From the band prelude gathering us for worship, to the music of our choirs, to praying our Palm Sunday liturgy- “Sing O heavens and be joyful O earth for the glory of the Lord shall be revealed!” Hail to the Lord’s Anointed!, to welcoming new members into our church family, right up to hearing that familiar story of Jesus’ triumphant, yet humble, entry into Jerusalem. I was really feeling that joy!

Until just a couple of minutes ago, as we sang that last hymn, Ride On! Ride on in Majesty! It is one of my favorites, I can’t imagine Palm Sunday without it. But it’s not exactly joyful. It’s melancholy at best, and maybe even a bit depressing. The tune is beautiful but certainly not joyful. And the words…

Ride on! Ride on in majesty! In lowly pomp ride on to die;
O Christ your triumphs now begin o’er captive death and conquered sin.

Ride on! Ride on in majesty! The winged armies of the sky
look down with sad and wond’ring eyes to see the approaching sacrifice.

Ride on! Ride on in majesty! In lowly pomp ride on to die;
bow your meek head to mortal pain, then take, O God, your power and reign.

As powerful and beautiful as they are, they make me, in the middle of this Palm Sunday joy, wonder about Jesus. I wonder about what he was thinking and feeling as he rode down the Mount of Olives. Riding on and seeing the crowds so excited by his arrival, so filled with hope and promise and anticipation and joy. Riding on and knowing that in order to meet their hopes and fulfill that promise, to live up to the anticipation and make their joy complete, it would require his death.

Riding on knowing that he would have to capture death (his own death) before he could conquer sin, the sins of the people around him and even the sins of all the world. Riding on knowing that even the angels in heaven couldn’t save him and sadly wondering why it was all necessary. Wondering why he must be the sacrifice for them, for all those following behind him. Riding on and seeing his cross and his death, his brutal and painful and humiliating death, and knowing that it was necessary before he could take his power and reign.

I wonder what that was like for him. It couldn’t have been fun or joyful, for Jesus knew where he was going. He knew where that procession would ultimately lead. But I wonder if he knew then what we know now. I think that he probably did. He told his disciples what would happen, that he would rise again after three days. But still I wonder if, riding on in majesty, riding on to his death, I wonder if his humanity got in the way of his divinity.

I wonder if he wondered, whether it would really happen, if he really would rise after three days. By then he knew that his death was inevitable but did he know that his resurrection was as well? Jesus was, as Paul wrote, in the form of God though he did not regard equality with God as something to be exploited. Instead he emptied himself, taking the form of a slave, being born in human likeness. He humbled himself and became obedient to the point of death, even death on a cross.

Did he fully and completely believe that once he humbled himself, to the point of death, that God would then exalt him and raise him from death to eternal life? Riding on into Jerusalem could he see past the cross and the grave to the empty tomb? Could he see his Father on his sapphire throne awaiting him? Maybe he could. Maybe he had full and complete confidence that he would rise from death.

That confidence, if it is there at all, seems to falter as the week goes on, as he draws closer to the cross. Just before his arrest, Jesus prays in the garden, “Father, if it is possible, let this cup pass from me.” Certainly that request could be more about the fear of the pain of crucifixion than about any doubts of resurrection. Whatever it is about, it serves as a great reminder to us. It reminds us that Jesus was human, just like us; that he had doubts and fears, just like us; that he felt pain and sorrow, just like us. Yet, even though he was just like us, he rode on, rode on in majesty.

Jesus knew where he was heading, he knew where the journey would end. And he rode on anyway. In lowly pomp, he rode on to die. He rode on to approach the cross as the sacrifice, not for his sins, but for ours. He rode on and bowed his head to mortal pain. Despite his doubts and fears, despite the pain and sorrow he knew was waiting for him, Jesus rode on.

That is indeed reason for us to celebrate today, to celebrate with great joy. The fact that Jesus loved us, and all the world, so much, that he rode on is great cause to celebrate. For Jesus knew that everyone would desert him, betray him and deny him. And he still rode on! That is the paradox of Palm Sunday- that sorrow underlies the joy, that there is fear beside the hope, that death accompanies life. It is why the rest of Holy Week is so important.

We could easily go from the anticipatory joy of Palm Sunday to the overwhelming joy of Easter Sunday and miss all that comes in between. We could go from “Hosanna, Blessed is he that comes in the name of the Lord!” to “the Lord is risen indeed!” … just like that. However that would be kind of like reading the first and last chapters of a book or watching the beginning and end of a movie, while skipping everything that happens in between.

Doing so during Holy Week, we would miss out on some of the most important teachings, some of the most important events in Jesus’ life. It’s no accident that right after Jesus says “Woe unto you, Scribes and Pharisees, hypocrites” and proceeds to tell them why they are hypocrites, it’s no accident that right after that, he tells them what they should be doing instead: feeding the hungry and giving water to the thirsty, welcoming the stranger and clothing the naked, caring for the sick and visiting the prisoners, doing for the “least of these”. It’s no accident that Jesus is sitting in the Jerusalem temple, just days away from his betrayal and arrest, his crucifixion and death, when he says that the greatest commandments are to love God and to love your neighbor. All of this is why Holy Week is important, it reminds us why we don’t want to miss out on all that happens in between Palm Sunday and Easter. The word “holy” means to be set apart. And the days of this coming week are meant to be holy and set apart. It is why we have set our sanctuary apart from its normal appearance and transformed it into this beautiful prayer garden. So that we can have a place to come as we set this week apart from our daily routines and schedules and we make time to come and worship. It is place that we can meet as we journey from Palm Sunday to Easter. It is where we can come and ride on with Jesus into all that lies before us- the sorrow and the joy, the fear and the hope, the death and the life.

Brothers and Sisters, let us set apart this holy week and ride on with Jesus. Let us be here, with him and with each other.

Ride on! Ride on in majesty! In lowly pomp ride on to die;
O Christ your triumphs now begin o’er captive death and conquered sin.