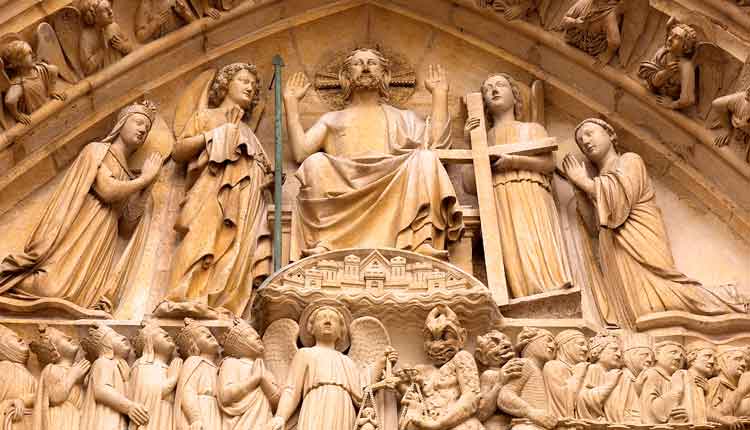 This morning I want to talk to you about a wonderful word of life and I am going to introduce it in song which is based on a text of scripture:

By a man came death,
By a man has come also,
THE RESURRECTION!

Now some people will say, “Wait a minute Worth, this is not Easter, it is Advent, you need to talk about something more Advent-tee and Christmas-ee.”

Now, unfortunately, we have already got several words and phrases at work that some regard as a secret vocabulary. Let me see if I can sort some of them out for you.

Second, consider the word “Advent” with an uppercase “A.” “Advent” with an uppercase “A” is a season of the church year that leads up to Christmas. It is a season of expectation. There are four Sundays in Advent, and on three of them we remember that the ancient Jews eagerly awaited the first advent of their Messiah, which, in Greek is “Christ,” and, in English, “King.” Christians beleive that the prophet Isaiah summed up these ancient hopes when he said:

For to us a child is born,
to us a son is given;
and the government will be upon his shoulder,
and his name will be called
“Wonderful Counselor, Mighty God,
Everlasting Father, Prince of Peace.
Of the increase of his government and of peace
there will be no end,
upon the throne of David, and over his kingdom,
to establish it, and to uphold it
with justice and with righteousness
from this time forth and for evermore

On the other Sunday of advent, the second, today, Christians celebrate our expectation of the King’s return. Some people get lost in the language the New Testament uses about the 2nd Advent of Jesus Christ. It is difficult to understand. However, when we distill all the language down to the bare essentials we are left with a very simple truth: If Jesus is who we believe him to be, then the Christ who appeared for the first time in human history in humility and hiddenness, his true identity as the Son of God known only to a select few witnesses, and to faith, like yours and mine, must of necessity appear a second time, in power and in glory, his true identity known to faith and unbelief alike. The Pharisees taught that there would be a general resurrection at the end of the world, and the righteous would be raised to eternal life, and the unrighteous to judgement. In Philippians 2, this General resurrection is the back drop of Paul’s statement that, after Christ humbled himself and became obedient unto death, even death on a cross:

God…highly exalted him and bestowed on him the name which is above every name, 10 that at the name of Jesus every knee should bow, in heaven and on earth and under the earth, 11 and every tongue confess that Jesus Christ is Lord, to the glory of God the Father.

The 2nd Advent of Jesus Christ is good news for believers, living or dead, because when Christ appears in glory we will share it, and our true identity will be revealed for all to see. Thus in 1st John 3:2 we read:

Beloved, we are God’s children now; it does not yet appear what we shall be, but we know that when he appears we shall be like him, for we shall see him as he is. (1 John 3:2 RSV) return of

Now at this juncture, I think we have dealt with the first advent of Jesus in humility and hiddenness, and with the 2nd Advent of Jesus in power and in glory, and how the risen Christ bill bring resurrection with him when he returns. However, I am quite sure I need to say more about resurrection itself. I would add two observations:

First, it needs to be said that resurrection is more than resuscitation.

In the New Testament Jesus raise some people from the dead, but it was not the same kind of resurrection that Jesus himself experienced when God raised him from death and gave him a place at the right hand of God’s majesty. For instance, in Luke’s gospel Jesus raised the son of the widow of Nain from death, and in John’s gospel, Jesus raised Lazarus, the brother of Mary and Martha from death. Yet both men came back to life in the same frail, body they had when they got sick and died. Their bodies were not yet suited for eternal life. That is more resuscitation than resurrection.

In contrast, the New Testament teaches that the body of Jesus was not just resuscitated, but wonderfully transformed. His resurrection body was still recognizably his body. It bore the marks of his suffering. His disciples could still see and feel the print of the nails, and the hole in his side. Yet, at the same time his body was marvelously different, and more than it was before. In Matthew 28, we read that when the disciples saw Jesus on the mountain top in Galilee, some doubted it was him. I am quite sure they doubted because it was hard for them to believe that the radiant figure who stood before them was the same man they had seen cruelly tortured and crucified. Likewise, in John chapter 20, the disciples of Jesus were in a room and all the doors and windows were locked, but Jesus suddenly appeared to them. Does that mean his body could pass through solid objects, and move through space unhindered? Only God knows. And in Acts chapter 1, the risen Jesus ascended into heaven on a cloud. This is most certainly an accommodation. The actual movement of Jesus from this world into the next involved mysteries about which the people of his day were totally ignorant. Of course, we are equally ignorant. We no longer live in a three storied universe, with hell “down there,” and earth here “on a level,” and heaven “up there;” but we still recognized only four dimensions, including height, and breadth, and depth, and time. String theory declares that there may be many at least six or seven more of which we are totally ignorant. Could Jesus move among them? Only God knows!

Second, we must say a word about how the idea of resurrection is related to the idea of the immortality of the soul.

The doctrine of immortality, in several forms, can be traced to the Greeks. According to “The Phaedo,” just before his death by poison, Socrates told his disciples he thought that men had a very reasonable chance of living forever. He said that if all things were unchanging, as they thought, then the soul was unchanging, and since the soul was the life force that always brought life, it could not be destroyed. The soul was immortal. Socrates went on to describe an afterlife that was a lot like our heaven. He even told his disciples that he looked forward to meeting the great teachers that died before he was born.

Now the idea of immortality of the soul sounds very efficient and simple to communicate. It is certainly a lot neater than the thought of God putting dead bodies back together again as he did in Ezekiel’s vision of a valley of bones coming back to life. And it is certainly more economical of action than God gathering the ashes of those we have scattered on the mountains and into the sea. And there are some passages in the New Testament that hint the Greek doctrine is not entirely incorrect, such as when Jesus spoke to the repentant and dying thief saying, “Today, you will be with me in paradise.”

Why then do the vast majority of Christian churches cling to the ancient doctrine of the Pharisees, and insist on the doctrine of resurrection? There are two reasons.

First the doctrine of the resurrection is more personal than the Greek doctrine of immortality of the soul. Socrates and his followers are exceptions. Many Greeks believed in immortality of the soul, but they taught that the soul was just a little spark which we receive from the flame at the heart of the universe which is God. They said that, when we die, the little spark goes back to the Eternal flame, and the identity of the little spark is lost. By contrast, when we study the doctrine of the resurrection from first to last, we see that resurrection insists that the person who God restores to life is the same person who died. I will still be me. You will still be you. This is a comforting thought, but also a sobering one. It means that what we do now will follow us for all eternity. It was Soren Kierkegaard who said, “If we fail to suffer in this life, if we shirk suffering, it will be eternally without remedy.” We might add, if we fail to serve like Jesus, and love like Jesus in this life, we will certainly regret it in the next, forever and ever, amen!

Some years ago, a member of this church came into my office and handed me a copy of U.S. News & World Report. The article said that modern science has proven that there is not such thing as the soul. When we are dead, we are really dead, gone, no more. She said, “What does this mean?” I said, “Well, for one thing, it means that modern science has finally caught up with the Bible!”

The primary teaching of the Bible is that we all one piece, body, mind and spirit; and, when the body is dead, so is the rest of us. However, the Bible also teaches that death is not the end of the human story. Death was not the end of the Jesus story. And because he lives, death will not be the end of your story or mine. Death is just a pause, whether long or short, it does not matter because we will not know, and God is on the other side of the pause, and it is God remembers us, and calls us back to life, and raises us to a whole new order of being.

Do you believe this? When asked the same question, a Jewish rabbi answered, “I think it is easier for God to raise the dead, than it is for God to forget me.” How much more do we believe that Jesus Christ is the first born from the dead, the first fruits of the harvest, and God’s guarantee that God has not abandon us to death and corruption, but has prepared for us, a future and a hope beyond our wildest imagination. As the apostle writes:

The Spirit bears witness with our spirit that we are the children of God, and if children, then heirs, heirs of God and fellow heirs with Christ, provided that we suffer with him that we might be glorified with him.