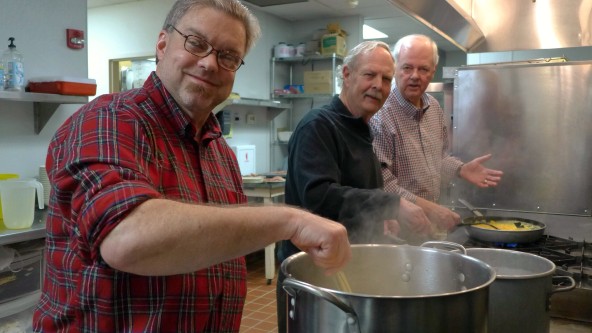 We are still talking about evangelism. Evangelism is a word that frightens some. It should not. It simply means to share the good news that God has put forward in Jesus Christ. St. Paul put the good news in its simplest form when he wrote to the church in Corinth saying:

1 Now I would remind you, brothers and sisters, in what terms I preached to you the good news, which you received, in which you stand, 2 by which you are saved, if you hold it fast — unless you believed in vain. 3 For I delivered to you as of first importance what I also received, that Christ died for our sins in accordance with the scriptures, 4 that he was buried, that he was raised on the third day in accordance with the scriptures….

The good news begins with the truth that “Christ died for our sins.” The fact that we confess that Christ “died for our sins” means that we can never share the good news from a position of imagined superiority. DT Niles, president of the Methodist Church in Ceylon, got it right when he said that evangelism is really nothing more “than one beggar sharing with another beggar where to find bread.”

Some people don’t like the word beggar. Yet after a certain point in life, many of us come to realize that he or she is a beggar. We are beggars because every sin we have committed carries a penalty, and that penalty serves to impoverish us. Some think that the penalty of sin is delayed until that day on which we come to stand before the throne of God; but we know differently. We know the penalty for sin is built in the woof and warp of life.

Let me put it another way. We read in the Proverb that when we cast our bread upon the waters, after many days it will come back to us. If the bread we toss upon the water is kindness, kindness will return to us. If the bread we toss upon the water is sin, sin will comeback to us, too, in the form of a penalty. Our sins always find us out, and they expose us, sometimes to our neighbors, but always to ourselves. And when we stand exposed, we come to realize that is not so much that we have broken the law of God as that we broken ourselves upon the law of God. Then we are ashamed and wise all at once. We are ashamed for our sins, because in the light of God’s forgiveness and grace they loom larger and larger. We are wise for now we know why God hates sin. God hates sin because it hurts us, and those around us. Sin separates us from God, and from one another, and from our own true selves.

Ironically, it is when we have been reduced to the status of a beggar, it is when we have joined that class of people Jesus called “the poor in spirit,” that we can, at last, draw close to God. The New Testament talks about repentance, in the original language it is metanoia. Metanoia means “to turn around.” Let me tell you something hopeful. It does not matter how long we have fled God, as soon as we turn around to meet God, we find God waiting for us. In the person the Living Christ, he is never more than a turn, a breath, a prayer away.

In his poem, “the Hound of Heaven,” Francis Thompson describes what it is like to flee the Him, down the nights, and down the days, and down the arches of the years. He said that the whole time he was fleeing he heard the steps….

From those strong Feet that followed, followed after
But with unhurrying chase,
And unperturbèd pace,
Deliberate speed, majestic instancy,
They beat—and a Voice beat
More instant than the Feet—
‘All things flee thee, when Thou dost Flee Me.’ ’

“Christ died for our sins,” but that is not the end of the story. St. Paul says that, “On the third day, he was raised from the dead.” It is the living Christ who pursues us down the nights, and down the days, and down the arches of the years. When we turn at last to meet him we are immediately filled with hope and assurances of God’s love for us. In Romans 8:35-39 the Apostle writes:

35 Who shall separate us from the love of Christ? Shall tribulation, or distress, or persecution, or famine, or nakedness, or peril, or sword? 36 As it is written, “For thy sake we are being killed all the day long; we are regarded as sheep to be slaughtered.” 37 No, in all these things we are more than conquerors through him who loved us. 38 For I am sure that neither death, nor life, nor angels, nor principalities, nor things present, nor things to come, nor powers, 39 nor height, nor depth, nor anything else in all creation, will be able to separate us from the love of God in Christ Jesus our Lord.

Evangelism is nothing more, and nothing less than simply sharing the good news, that Christ died for our sins, and was raised on the third day in order that he might be the LORD of both the living and the dead.

First, you can be regular in your attendance at church. Nothing signals the spiritual health of an individual or a congregation like attendance in public worship. There is really no substitute despite many objections. I once listened as a young man made a profession of faith as we sat on a curb in Charlotte, N.C. When he had made his profession and prayed, we stood, and shook hands, and started to part. I said to him, “I will see you in church on Sunday.” He said, “No you won’t.The church is filled with hypocrites.” I said, “Isn’t that amazing, you have been a Christian so short a time and already you have a vision for what a Christian ought to be. Why you don’t you come to church and show the rest of us.” He was there on Sunday, and his presence helped us all. We have visitors this morning. Let me say right up front that I had rather have a new member who was in worship every time he was truly able, than a new member who pledged $10,000 a year. I am not disparaging those who give. It means so very much, and, sometimes, it is all that we can do. I am merely exalting the idea of attendance at worship.

Second, you can take up some task to serve the people of God who belong to this congregation. This church could not go forward without our musicians—the choirs, the band, the bells; and the ushers, and Sunday school teachers and workers; and sound people, and kitchen helpers. Let me remind you that Philip the Evangelist got his start as one who waited on tables. (Acts 6:1-7) On Wednesday we raised more than $1,000.00 for the Winston-Salem Street School. One visitor was so impressed with the ministry of the street school—-and with those who make the Open Door Lunch possible, that he put in a check for $300.00. I am awed by the work of our Open Door lunch volunteers.

Third, you can take up some task to serve your neighbor. Last week I told you about my dad, and I should have mentioned his partner, the late John Holleman. Together they gave c. 1,000 needy children bicycles at Christmas over a period of thirty years. Likewise, we had a member here who served his neighbors by simply picking up their paper, which was always left in their yards, and putting it on their porches. He kept a count. He told me once how many papers he had moved, and it was in the thousands. We have people who volunteer at the Sunnyside Ministry, and at Crisis Control, and at the Samaritan Inn, and at the Bethesda Center. One member serves on the board of a hospital. I recently heard a pastor say that we sometimes worry about the wrong statistics. He said, “I would rather serve a church of 50 that touches 100 lives in the course of a week, than a church of 100 that touches 50 lives in a week.”

Last night—with about fifty others, I attended a meeting at the house of Joe Jarvis. With the help of Bishop Sam Gray and Bruce Ledwith, Joe has launched a fund, named for Brother Armando, to help the church in Cuba. Joe will be the first to tell you that there was a time when his primary interest in Cuba was the acquisition of Cuban cigars; but contact with Christian brothers and sisters in that land has changed all that.

We begin our witness when we live out our faith in some concrete way. We cannot be Jesus Christ. We live by his grace, and he is our goal. We read in Ephesians 4 that we are to go on growing until we attain to the measure of the stature of the fullness of Christ. That is a goal to strive for, even though few will ever attain even a measure of that goal in this life. We cannot be Jesus Christ, but we can be his hands and feet in the world.

It is when we have truly become his hands and feet in the world, that people invite us to share our story. In the past sharing the good news meant knocking on the doors of strangers, and handing out tracks with names like, “Where will you spend Eternity?”, or “Four Spiritual Laws.” I don’t want to demean those faithful Christians who felt compelled to do that; but there is another approach. It is the simple approach of inviting a neighbor, or a friend to your church, or of telling them your story, when the time is right. In 1st Peter 3:15 we read:

Always be prepared to make a defense to any one who calls you to account for the hope that is in you, yet do it with gentleness and reverence;

The truth is the best time to speak is when you have been invited to share the hope you have. And the best way to speak is with gentleness and reverence. We will speak more of this next week, but I hope you are starting to see that evangelism is not such a frightening word after all.