To Thine Own Self Be True

Home Blog Posts To Thine Own Self Be True 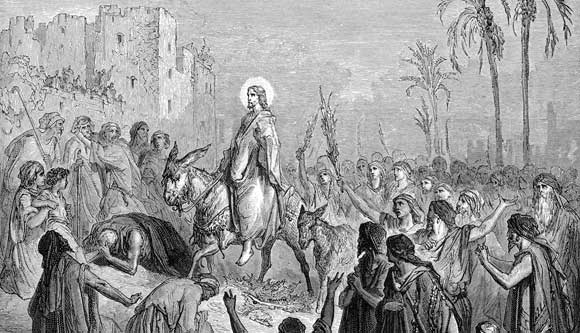 There is a familiar passage in Shakespeare's "Hamlet" that goes like this:

This above all: to thine own Self be true,
And it must follow, as the night the day,
Thou canst not then be false to any man.

Jesus of Nazareth was the Servant of all, but he was true to himself. Nowhere is this better seen than in the story of his triumphal entry into Jerusalem on the back of a colt, the foal of an ass.

As the typical traveler approached Jerusalem, he would dismount, and lead his beast into the city, so that not one of the people of Jerusalem would suppose that he was bold enough or foolish enough to enter Jerusalem in the manner that Zechariah prophesied for the coming of the Great King.

Rejoice greatly, O daughter of Zion! Shout aloud, O daughter of Jerusalem! Lo, your king comes to you; triumphant and victorious is he, humble and riding on an ass, on a colt the foal of an ass. Zechariah 9:9

H=Jesus did just the opposite. He sent his disciples to find an animal (Matthew says it was two animals, but I believe the text is a result of copyists error) just like the one described by Zechariah. And, then, placing himself upon it, he entered the city in the manner that Zechariah had prophesied. In this simple act Jesus proclaimed to the city, and to the world, that he was God’s Messiah, Christ, King.

And the city responded. The disciples went before him, strewing his path with their garments and with branches they cut from the trees, and they cried out, “Hosanna to the Son of David! Blessed is he who comes in the name of the Lord! Hosanna in the highest!”

Hear again those words of the Bard of Avon:

This above all: to thine own self be true,
And it must follow, as the night the day,
Thou canst not then be false to any man.

Think how often that the spirit of these words has guided the truly great of this world.

Think of Galileo, watching a lamp swinging in a lazy circle in the cathedral at Pisa, when he ought to have been listening to a sermon by his bishop. It was as he watched that swinging lamp that Galileo reached a conclusion..the Earth orbits the sun, not the sun the Earth. The church of his day which still read the Bible as a scientific text book, and believed in a flat earth cried, “Heresy.” They delivered Galileo to the inquisitors. They threatened him with torture, and with excommunication. Officially, Galileo recanted. But after he recanted, he rose to his feet and muttered, "But it does move." He was true to himself, and others who followed confirmed his theories, and a modern world is in his debt.

Think of Winston Churchill, the great Prime Minister of England. As a member of the House of Commons, Churchill warned against the dangers of Hitler. He said that Der Fuer had one goal---to subjugate all of Europe. He urged Britain to build up her army and her Air Force. He was a laughing stock. Then, all his predictions proved true. He was elected to the office of Prime Minister, and no one has ever done better by that office. When Great Britain was forced to stand for a time alone, against the wrath of Germany, Churchill shook his fist in the face of Hitler saying, "We will have no truce or parley with you, or the grisly gang who work your wicked will. You do your worst---and we will do our best!" Winston Churchill was true to himself, and true to his convictions, and the modern world has been forever grateful.

Or think of Rosa Parks, who was so tired that she refused to go to the back of a Birmingham Bus. A tiny little woman engaged in one small act of civil disobedience, and she shook this nation to its core. And a modern world has been forever grateful.

Now it is all well and good to talk about Jesus Christ being true to himself, but can we lay the same exhortation upon ourselves. Can we speak of being true to ourselves in a world that we share with 7 billion 226 million other people.

I think we must. According to Jesus, the first and greatest commandment is to love God. The second, which he likens to it, is to “Love our neighbor even as we love our selves.” Love is not just affection; love is also respect. Jesus knew that if we did not have both affection and respect for ourselves, we could not possibly love and respect others.

Of course, many of us will have a hard time loving and respecting ourselves. We think of ourselves as damaged goods. We are disappointed that we have expected little of ourselves, and achieved it. We know that we have willfully broken and transgressed God’s Law. We know to do good, but we have not done it.

How can we love and respect ourselves.

That is a good question. I will never forget when I found my answer. A young man barely out of his teens put that question to me as he was in hospital recovering from a nervous breakdown. His breakdown was precipitated by his total lack of respect for himself, which grew out of his great moral failures.

He asked, “How can I ever overcome my past?”

I had a pack of note cards with me. I used to carry them in the days before smart phones. I took one out and I wrote, “When we belong to Jesus Christ, we can remember our past, but we must remember it like it happened to somebody else, because Jesus Christ has claimed it for his own.”

The next year he rode a bus to Winston-Salem to play his horn in our Easter Band. When I met him that morning, he handed me a badly worn note card. It read, “When we belong to Jesus Christ, we remember our past, but we remember it like it happened to somebody else.”

The self is not all bad, but we need to draw a line between the Ego and the Self.

The Ego is the Old Self. It is self-aware, it thinks, it imagines. This is good, but it does more. The Ego seeks to put itself forward. It seeks to win the game of life. It climbs the corporate ladder. It fights jealously for all the rights and privileges it considers to be its due.

When Jesus said, “If anyone would follow me, he must deny himself, and take up his cross and follow me," he was talking about the Old Self, the Ego. But the Self is something more than mere Ego. According to the great Swiss psychiatrist and psychologist Carl Jung, the Self is the most primitive of the archetypes of our collective unconscious. It is the thing in each of us that strives for health and wholeness. It lifts up strong hands in the quest for perfection.

Jung says that all the archetypes express themselves within, in the mind, but also without, in society. Though Jung was hardly an orthodox Christian, he said that in the outer world, Jesus Christ represents Self that all of our inner selves want to emulate.

St. Paul would have agreed completely. St. Paul says that the man Adam was the archetype of our old sinful selves. He called Adam, the man of dust, and said that he led the world into sin. St. Paul says that Jesus Christ is the last Adam, the archetype of our new humanity. He says that as we have borne the image of the man of Dust, the first Adam, so in Christ, we all bear the image of the man from Heaven, the Last Adam, Jesus Christ.

Sometimes, without even realizing it, each of us, deep down, in our one true Self wants to be like the magnificent Self who rode into Jerusalem on a colt, the foal of an ass, because he had to be true to himself, and true to his mission, and true to his God, and Father. How do we become our true Self.

First, it means we must look not for the worst in us, but for the best in us.

The scripture consistently teaches that we are the person we are when we are at our best, not the person we are when we are at our worst. We remember that Thomas doubted, but he was also the first to confess Christ as his Lord and his God. Tradition says that Thomas planted the Church in India. And we remember that Peter denied, but we also remember that when Peter turned again, he strengthened his brothers and sisters, and became a pillar of the church in Jerusalem. Tradition says that he was crucified upside down, because he refused to be crucified in the same manner as his Lord. Mary Magdalene was a woman of uncertain past. Some argue that she may have been a prostitute. Yet both John and Matthew tell us that Mary was the Apostle to the Apostle, the first to see the risen Christ, and to embrace his feet in faith. I could go on and on.

Second, being true to ourselves means that we must believe that our gifts are given to us by God.

This was surely the case with Jesus. The day would come that even the members of his own family accused him of being "beside himself." But he remembered that day in the rivers of Jordan after John had baptized him that the heavens open, and the Spirit descended, and the voice came to him, declaring, "Thou art my beloved Son, and with thee, I am well pleased!"

I grew-up believing that in order to be a follower of Jesus Christ you had to find the hair shirt that God made just for you, and put it on, and be miserable.

Nothing could be further from the truth. We do not even know who we are until we discover who we are in Jesus Christ. God does not give out hair shirts. God gives out robes of righteousness, the righteousness of Christ. We make our hair shirts, and put them on out of guilt that God wants to take from us.

Third, if we are to be true to ourselves,we must never give up, or be discouraged.

When Jesus rode through the gates of the city, he heard the Hosannas. Yet he knew he was taking a short ride that would lead to longest, darkness night of his soul. But he did not dwell on the darkness of that night. He looked forward to the Joy that he knew would come in the morning, on the third day. The author of Hebrews writes, “For the joy that was set before, he endured the cross, despising the shame, and is seated at the right had of the throne of God.

Jesus rode the colt, the foal of an ass into the city of Jerusalem, and God made him the King of Kings and the Lord of Lords.