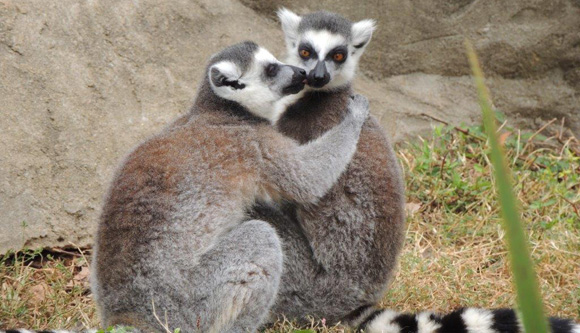 This delightful couple was among those who enjoyed the Funtastics outing to the Lazy 5 Ranch in Mooresville on September 19th.  Of course, the ring-tailed lemurs were on the inside of their enclosure while the group from New Philadelphia viewed them from the outside.  Nonetheless, the animals were entertaining and seemed comfortable being the center of attention.

The Lazy 5 offers the chance to see and feed some of your favorite animals – ostriches, llamas, water buffalo and American bison to name a few – in a natural habit and from the security of a wagon pulled by Clydesdales.  On this 3 ½ mile safari, we encountered more than 650 animals from 6 continents.  This is the second consecutive year that the Funtastics have visited the Ranch.  Thanks to Tom Nelson and team for choosing this site for a great excursion!